Everything's Archie -- Even the Courts 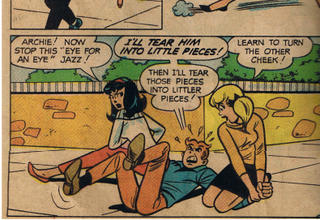 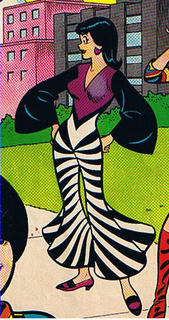 Archie Comics, publishers of the adventures of the eponymous redheaded teen with the outdated fashion sense, has sicced its lawyers on an Australian rock band called "The Veronicas." The Reggie Raconteurs allege that the existence of a band with the same name as Archie's raven-haired rich witch will dilute their brand name; and interfere with their planned production of a "Betty and Veronica" movie with Miramax. (Maybe Miramax with give them the "Sin City" treatment.)

I'm sure the TV show "Veronica Mars," the estate of Veronica Lake, Ronnie Spector, and every female in the world named "Veronica," "Nica," or "Ronnie" is next.

Makes me wonder about the various other rock and pop bands with comics-derived names -- Love and Rockets, Tintin, Duran Duran (named after a character in Barbarella), or even that Australian band from the '80's, Uncanny X-Men. Did any of them interfere with the brand names of their various namesakes?
Posted by Danny Barer at 8/17/2005 10:01:00 PM