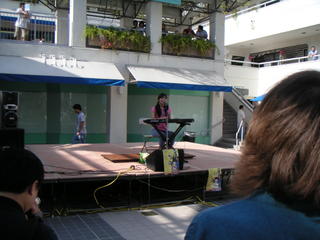 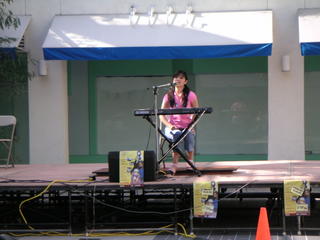 Someday, Mari Iijima's life should serve as the inspiration for a novel or a hit movie -- sort of Lost in Translation in reverse. When I started getting into Japanese Animation fandom in the early 80's, Iijima was the first Japanese voice actor I knew of by name. She acted in a single anime work -- the TV series and movie Macross, shown on American TV as part of Robotech. She played teenage ingenue Lynn Minmay, who became a "pop idol" in the show; and Iijima similarly found herself a wildly popular real-life pop idol in Japan, as the songs she sang on the show became hits. Iijima is a songwriter as well as a singer, and has put out something like 19 albums through her career. In 1989, Iijima moved to LA, became involved in a marriage that later ended, and became the mother of twin boys. Since then, she has attempted to recreate herself as an American singer-songwriter-actress. Although she has the advantages of musical talent and youthful looks (she still gets cast as college students, even though she has been in the business for around 23 years), she has met with mixed success. Ironically, she has found her fan base in America through those like me who recall her single foray into anime stardom.

Above is a couple of photos of Iijima performing in LA's Little Tokyo yesterday, as part of the neighborhood's Nisei Week activities. She performed a couple of songs in English and a couple in Japanese (including her biggest hit from the Macross movie, Do You Remember Love (Ai Oboitemasuka)) . She spoke between songs about her dissatisfaction lately with the romantic arena; and, spotting Amy and me holding hands in the audience, remarked that she envied us.
Posted by Danny Barer at 8/14/2005 10:17:00 AM