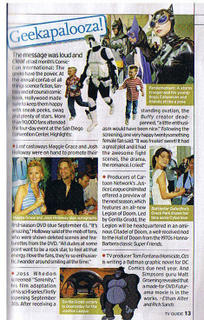 I've seen articles about this year's San Diego Comic-Con in the LA Times, Variety, Entertainment Weekly, and now TV Guide. All the articles have two things in common (1) extensive gushing about the Hollywood types who attended and (2) reporters who believe they are the acme of cleverness because they have come up with a new use for the word "geek." "Geekapalooza!" raves the headline on this TV Guide article; reporters Ethan Alter and Rich Sands assert, "The message was loud and clear . . . The geeks have all the power."

If these "geeks" indeed had "all the power," would they really wish to be referred to as "geeks?" Here's how the Merriam-Webster Online Dictionary defines this affectionate term:

Function: noun
Etymology: probably from English dialect geek, geck fool, from Low German geck, from Middle Low German
1 : a carnival performer often billed as a wild man whose act usually includes biting the head off a live chicken or snake
2 : a person often of an intellectual bent who is disapproved of

In other words, call someone a "geek" on the mean streets of LA and he may hand you your liver (or bite your head off, if the word really fits). Call someone a "geek" in a national magazine and he'll supposedly genuflect at your feet for glancing in his direction, like -- well -- like a person of an intellectual bent who is disapproved of . . . .
Posted by Danny Barer at 8/01/2005 09:07:00 PM

I think they are imaginationphobes.

They have an irational fear of people who actually have an imagination.

There are two things going on here. One is that some folks are afraid we really do have all the power--or are well on our way to getting it--so they're trying to reassert the social dominion they lorded over us back in high school, using the same immature, name-calling tactics.

The other is that many of the famous "geeks" these folks fawn over have embraced the term, in the same way many gays have embraced "queer." So some of these guys may think they're just using the language of the geek tribe, maybe even paying us a compliment.

As with most former insult-words now embraced by their targets, the trouble is telling the difference. And that means how they say it is indeed important.