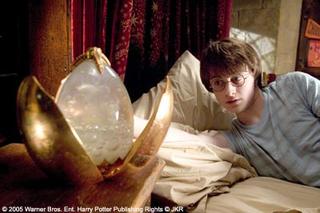 We finally finished Harry Potter and the Half-Blood Prince, which Amy and I read out loud to each other. This is the first HP novel we both worked on at the same time, since Amy read a bunch of them straightaway after the first movie came out.

In terms of style, I think this book is far more tightly written than the last few books. In Goblet of Fire and Order of the Phoenix, I sometimes cringed at JKR's overuse of adverbs -- especially when she repeated an adverb two or three times on the same page and sometimes within the same paragraph! Little of that appears in this book.

I wonder how the movie version of this will come out. Much like Goblet of Fire, this book (mild spoiler warning) has a transitional end that may leave an Empire Strikes Back type feeling of second-act inconclusiveness.

Speaking of Goblet of Fire, we're looking forward to the movie, especially with the lively trailers we've seen. My thanks to the official HP site from Warner Brothers, which is allowing web pages to legally use photos from the movie like the ones above.
Posted by Danny Barer at 10/09/2005 03:50:00 PM