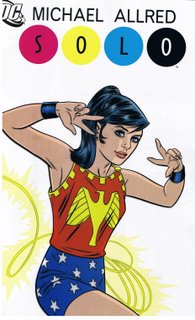 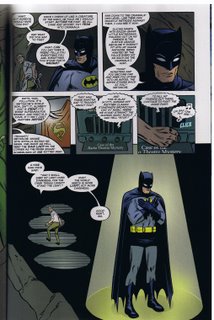 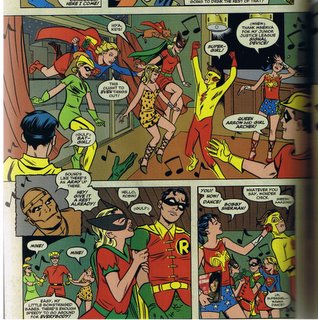 My candidate for my favorite comic book this year (so far) is DC Comics' SOLO issue 7, written and drawn by rock musician, independent filmmaker, and comic book maker Michael Allred. This issue is Allred's love letter to the DC comics he loved as a kid in the sixties and seventies. He is the perfect artist to draw tributes to and satires of this era. His work is like good rock music: a little nostalgia, a little cutting edge, a little slick, a little rude.

The issue includes fun little stories, like one where golden-age superhero Hourman takes his Miraclo pill, which gives him super-powers for an hour; responds to a false alarm; and then, like a crank addict, frantically burns off the extra energy the pills gave him -- painting a house in two minutes, delivering a pizza in 10 seconds, heading to the gym and juggling three guys with his feet. Another crazy story (bottom) features the two most self-consciously "hip" series of the sixties, the Doom Patrol and the Teen Titans, in a hilarious generation-gap riot that manages to squeeze in scores of minor characters (in both age and magnitude).

The standout feature, however, is a dark tale of Batman and Robin (top right), in which the hermetic, perfectly-ordered world of the sixties Batman TV series is invaded by the "relevance" that would dominate comics in the seventies. "Real life" concerns interrupt the hero-villian dance, with Commissioner Gordon deriding Batman as irrelevant while he and Chief O'Hara head off to quell a race riot. As Alfred frets in the story, "Why is it the good things are never 'real life,' only the bad?"

The only negative aspect of this comic is the price: $4.99 is way too much for a comic, even one with pretty printing and no ads.