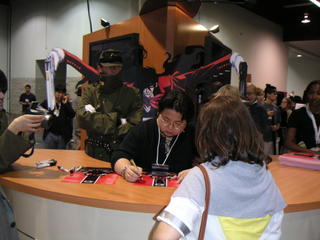 We've just completed my first and Amy's second day at Anime Expo 2005 in Anaheim. Today was an extremely happy day for Amy (and when Amy's happy, I'm happy). Amy's favorite anime/manga is Hellsing -- a dark adventure series featuring a vampire-hunting vampire -- and her favorite manga creator is the creator of Hellsing, Kohta Hirano. Two of Amy's fondest wishes were that (a) Hirano would come to a US convention and (b) Hellsing -- which had been adapted into a 13-part animated TV series in 2001 (it ran on the Action Network in the US in 2004) would be turned into further anime. On Saturday, July 2, Geneon held a panel where not only did they show a preview of the new Hellsing Ultimate OAV animated video (which appears to adapt the manga faithfully), but also brought on stage surprise guest Kohta Hirano!
Here's a picture of Hirano signing autographs, with his creation Alucard in the background, in a photo taken by Amy Saturday Afternoon. More on the Expo later.
Posted by Danny Barer at 7/03/2005 12:07:00 AM