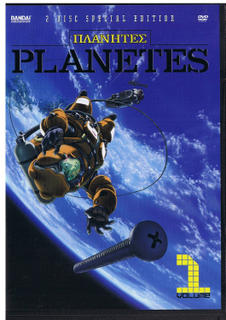 My joy at watching a seemingly-flawless shuttle liftoff has turned to chagrin at the news that (a) a two-and-a-half-foot chunk of foam flew off the external fuel tank -- the same type of foam that doomed the Columbia -- and only by luck did it miss the orbiter; and (b) although NASA spent two-and-a-half years and nearly two billion dollars since the Columbia tragedy working on making the shuttle safer, they took few or no steps to prevent the foam from coming off the external tank -- even though that caused the Columbia incident. Instead, they worked on developing scenarios for astronauts to deal with and survive another foam crash -- kind of like learning to use an extinguisher instead of working to prevent house fires. Here's the LA Times story.

Oddly enough, this and other current events have me thinking about two Japanese animated TV series.

One is Planetes (see picture above and left), a series that ran on Japanese TV in 2004 and is now being released in the U.S. It is a rarity in many ways. Hard science fiction is seldom attempted in movies or TV; even more seldom in animation. And media science fiction even more seldom deals with "blue collar" stories, with non-military working joes in space. (The first Alien movie is a noteable exception.) Yet this series strives for scrupulous realism as it depicts a group of workers for a private company that pulls pieces of space debris out of orbit when they pose a hazard to space navigation. The DVD includes interviews with real members of NASA's orbital debris tracking program, who supply the sobering statistic that there is literally millions of pounds of space debris in orbit -- all put there by man -- that could potentially pose a hazard to shuttles and other spacecraft.

The animation in Planetes is above average, and the artwork is beautiful. Unfortunately, from the first three episodes I've seen, the stories run to the trite, with a young, idealistic rookie and her mentor, a slightly-less-young cynic, as the focus. (Plus, although they work for a multinational company, the office structure is noticeably Japanese.)

The other series brought to mind is the excellent '90's science fiction series Cowboy Bebop, which runs here on Cartoon Network. One episode of the series, Wild Horses, featured an engineer named Doohan who lives on Earth and cares for old spacecraft and aircraft. When the series lead, Spike, ends up in trouble while in Earth orbit, Doohan lumbers out an old shuttle to come to his rescue. And the shuttle is -- the Columbia!

Now both the Columbia and James Doohan are gone. And we need to get our space-faring priorities straight. Instead of running an aging shuttle fleet into the ground, we need to develop new, more efficient space vehicles -- with redesigns to address safety problems, instead of merely contingency plans to rescue the astronauts when those problems occur.

Hear, hear! Why does everyone seem to assume the choice is between "Keep doing exactly what we've been doing whether it works or not" and "Stop doing anything significant"?

PapaCool asks if it is wrong to tune into the live broadcast of the space shuttle landing just like many would a NASCAR race? You hope no one is killed, but you watch to see the crashes? Just being honest here.