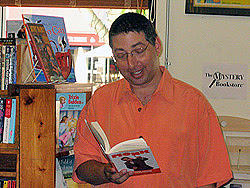 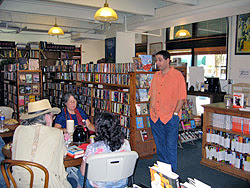 My cousin Lee Goldberg, who has been in Europe all summer producing the pilot for the TV series "Fast Track," is briefly back in the States (he is leaving again tomorrow for the Old Country) and had a signing Saturday afternoon at the Mystery Bookstore in Westwood for his latest MONK tie-in novel, MR. MONK AND THE TWO ASSISTANTS. I decided to get my exercise that day by bicycling up to Westwood Village to see him. My neighborhood is downhill from the Village, so the ride was a pretty good workout; and what better way to greet my cousin and his reading public than drenched in sweat.

Lee held a Q & A, in which he discussed Europe ("Crotches. Crotches everywhere."); bringing the top action producer in Germany together with Stephen Cannell; writing bits in the MONK novels that the TV series writers sneak into the episodes; and even a scene written for (but cut from) one of the episodes in which a writer named Lee Goldberg appears. (In the scene, Monk sits in a publisher's waiting room. "Lee" sits next to him, with a fat manuscript. Monk glances at the first page of the manuscript, and announces who "did it" in the book. "Lee" promptly dumps the manuscript into a trash can and walks out.)

Lee also described how he included obscure pieces of automobile techobabble in his script for "Fast Track": He wrote gobbledygook in the script whereevery he wanted tech-talk to go; then called up our mutual cousin Sam Barer (who writes a column about cars) and had him supply automotive stuf for the placeholder words. Our family, the resource.

Since I left my camera at home, and the photo I took with my cell phone was lousy, I took these pix from the Mystery Bookstore newsletter.
Posted by Danny Barer at 8/25/2007 03:34:00 PM

Hey, you are making us look like bad relatives. We didn't even KNOW he had a book signing! It's true he has a new book come out every 3.5 seconds, but still. Any excuse to travel over both hills is one we'll take!