What better way to start off the first day of summer (and the third day of an LA heat wave) than a morning ride to the beach?

I snapped this with my cell phone camera on Venice beach around 10 am, after I had pedaled up to the beach, had breakfast at the Sidewalk Cafe, and biked up the beach path to north Santa Monica and back. 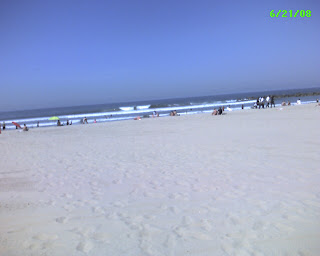 When I first got to the beach (about 8:50 am), it was sparsely populated. The users increased as the morning went on and the weather got hotter -- although there were still plenty of empty parking spots in the lot next to the SM pier. I suspect gas prices are making folks more reluctant to head to the beach.

As on previous trips, I marveled at the number of people, foreign and domestic, who are unable to read the "BIKES ONLY" markings on the path. Perhaps they read the markings as saying, "BIKES, ROLLERBLADES, SKATEBOARDS, PEDESTRIANS, STROLLERS, TODDLERS, AND FAMILIES STOPPING TO TAKE PHOTOS ONLY."

Most absurd moment: the southbound lane on the bike path was blocked by an SM police officer in a dune buggy, who was explaining to two guys that only bicycles were allowed on the path.
Posted by Danny Barer at 6/21/2008 12:46:00 PM

Email ThisBlogThis!Share to TwitterShare to FacebookShare to Pinterest
Labels: beach