This weekend, LA hosted a sumo wrestling tournament for the first time in 27 years. The LA Times Website features this photo gallery from photographer Gary Friedman of the wrestlers' tour of such quitessentially LA sites as Hollywood, Dodgers' Stadium and Universal Citywalk.

Here are two of the photos: 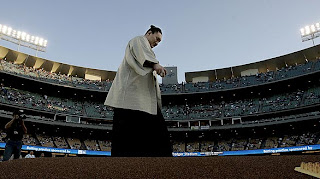 One of the wrestlers throws out the symbolic first pitch at a Dodgers game. 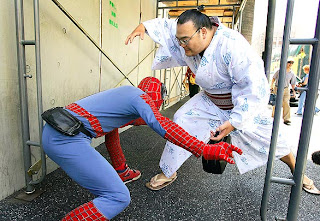 Another squares off playfully with one of the costumed performers outside Grauman's Chinese in Hollywood.
Posted by Danny Barer at 6/08/2008 04:14:00 PM