He's Here to Save the Nation, So Stay Tuned to This Station

If the 1960's were the golden age of Sat-Am superhero cartoons, the nineties were, well, at least the bronze age. You had your serious superheroes (Bruce Timm's two Batman series and his Superman series; Fox's Spider-Man; Haim Saban's X-Men). You had your comedic superheroes (The Tick). And then you had Freakazoid, which essentially escaped definitions. 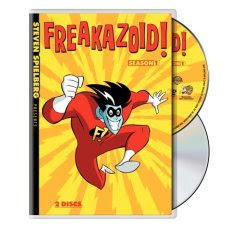 Freakazoid -- at least the first season, before The Man imposed a story structure on the episodes -- was like one of those free-form blackout-gag-filled '60's sitcoms, such as the Monkees or its ilk, albeit amped up like a four-year-old stuffed full of sugar-snacks. It had one of those insanely catchy opening themes, a blue hero with few discernable powers who (as the theme song put it) "runs around in underwear," painfully hip writing, and a general sense of fin de siecle exhaustion with the pop-culture detritus of the 20th Century. Really. I mean, where else can you find a Saturday morning show with George Takei, Mark Hamill, Stan Lee and Harlan Ellison stuffed into one episode?

My friend John McCann was one of the writers and producers on the show. He also wrote for such other standout '90's animated shows as Animaniacs, Pinky & the Brain, and Batman Beyond (for which he wrote the memorable episode, "Terry's Friend Dates a Robot".) One hopes he'll see a few bucks in royalties when folks buy this upcoming DVD set of the first season, as they likely will in relative droves.
Posted by Danny Barer at 6/09/2008 10:36:00 PM

Email ThisBlogThis!Share to TwitterShare to FacebookShare to Pinterest
Labels: Freakazoid